How Columbine Helped Me See My Life – Looking Back 20 Years

You cannot be over the age of 35 and fly to Colorado to speak at a 3-day teen conference without thinking about it. In fact, it was nearly all I could think about as the plane began it’s descent. The thoughts that rolled over in my head were themselves like dusty folders from high school tucked away in the far back of one of my storage cabinets.

Some of us keep all the things — especially when we think they will always matter.

While the contents of these memories were filled with life-changing observations, ultimately I had filed the whole story in the “I’d rather forget this ever happened” section. I know I’m not alone in this, either. Maybe you have a section like this full of files of your own.

But what if these files weren’t meant to be forgotten, because they will always matter? And what if what they really tell us, if we listen closer, is more about the hope we having coming, rather than only the sorrow we have experienced?

It was this thin curiosity that gave me the courage to open a file dated April 20, 1999, with God.

I opened it on a stunning and sunny, albeit frigid, afternoon outside of Denver, Colorado, in February 2019. I had a little time to myself after finishing one of the talks to the teens. I felt restless until I realized I was only 17 miles away from where my heart wanted to go to let go of something heavy. So I got in my rental car, plugged the address in my phone and set out.

I went to visit Columbine.

As I drove, I wasn’t even sure what I’d do. I didn’t know if there was a parking spot for visitors, or tourists really. Then I wondered if there really were “tourists” that visited there, and if that made me less peculiar for going. I wanted hot coffee desperately, but wanted to wait until after, as if drinking coffee while I walked and prayed would be somehow irreverent. I didn’t really think about what I would find there, but I felt compelled to go…to remember…to pray…to cry and release my faith in hope of what God can grow when seed dies in the ground.

As I got closer in the town, I noticed the neighborhoods and the sidewalks on streets. I noticed the local grocer, the street signs, the parks and small businesses. It had all the quaint nuances of a family-friendly community, and I wondered what the stories were of the grown-ups. I wanted to hear them, to share my own.

I was a senior in college at the University of Notre Dame. I was preparing for finals and the rest of my life with no idea how either would turn out. I was just six months out from a called-off engagement, and the plans that I started my senior year with – the plans for after graduation – were wiped clean off the slate: marriage, become a doctor’s wife, have babies. The world was wide open to me again and I was floundering to find my bearings. I wondered how I was going to secure myself, earn an income that not only paid my student loans off, but also guaranteed I would enjoy a certain quality of life. I wanted to do something grand to prove myself to others, but was scrambling to figure out who I was and why I was here.

Then I walked into the student center, LaFortune, one afternoon between classes.

I noticed the odd silence, in spite of the shoulder-to-shoulder crowd of students and faculty in the building, all crowded, hunched and listening attentively to the big screen televisions in the main areas. I strained to read the banner along the bottom of the screen, to catch up on what had caught all of the attention. As I read, and heard the weeping in the room, and put it together in my head the reality of the tragedy, I joined my brothers and sisters coming undone.

It wasn’t the first time we had collectively felt tragedy, but it was a first time for us feeling it in such a vulnerable place — with kids learning in a school.

I went back to my dorm, my friends and I continued to grieve, ask questions of God, and shared hope together. In time, we returned to our books, we took our finals, and we went on with the rest of our lives. But what didn’t move on from me was the shock wave of what is meaningful in this life. That day was a day of reckoning for me, and something shifted that has altered not only the trajectory of my life, but the way I see my life.

See, nothing, absolutely nothing, matters more than sharing the love of Jesus with others in this brief life.

I tried to weigh careers, titles, benefits packages, after Columbine. I still needed to make decisions based on my budget, and pay my bills, and become an employed citizen of these United States. But what held the greatest value to me was no longer my quality of life or title, and definitely not making myself grand. What mattered was that I poured my whole self into my whole life, with Jesus.

The teacher and students that lost their lives that day, were a part of me finding mine.

Hitting my knees with grief and questions did bring me to a deeper faith, and it changed my definition of normal too by making me discontent with the “normal life” I had been pursuing just days before.

I finally arrived at the high school, and students were letting out from classes. I turned into a parking lot clearly marked for a Columbine Memorial. I wasn’t peculiar, not for wanting to come close. Sometimes we need to go touch the ground where the seed died, so we can bring our hands to meet up with our hearts. They had renovated a good portion of the school since the tragedy. It made perfect sense to me. 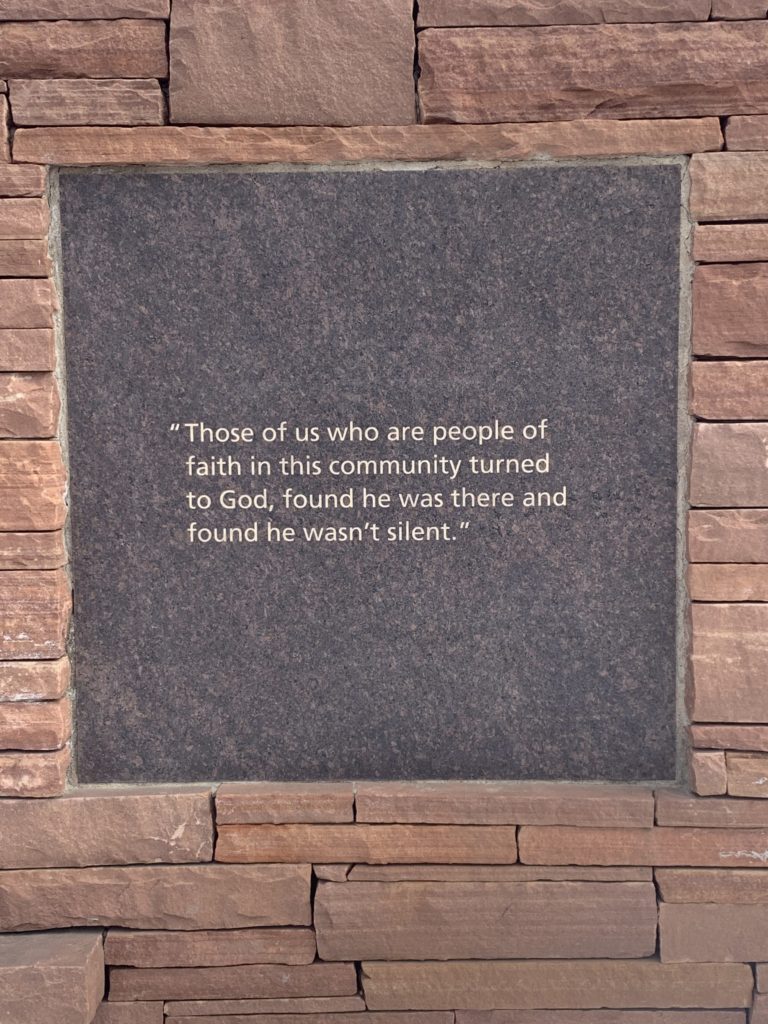 I read over all their names at the memorial site located just off the back of Columbine High School, behind the baseball and soccer fields. I read the words etched in rock scripted by family members honoring their lives. I wept, hard. I cried out to God to bring a harvest, to take what was meant for evil and to turn it to good. I prayed for the teens I was speaking to that week, and the ones growing in my fields at home, as well as around the world. I prayed for them to know the God of the Universe who sees dying like moving from Monday to Tuesday. I prayed they would trust in His Son, Jesus, and find peace in being eternally secure like so many of the teens that met Him that day in April of 1999 on this land.

I prayed I would remember. I prayed that I would live my meaningful life, a life full of meaning because it was spent sharing the love of Jesus with my world.

As I pulled out, I felt lighter, full of hope as I watched the mountains stay still, strong, obedient to the God who created them. Nothing took God off guard on April 20, 1999. He wept, but He was not dethroned. He is the God of Easter, an empty tomb, of resurrection. Death no longer has a sting, because Christ conquered it through His own death on a cross.

God had a masterful plan in that death, and for those lives taken on that land. Their stories are living on even influencing this woman in her 40’s from another state they have never met.

Whatever was meant to silence their voices, only made them echo from sea to shining sea.

On my way back to my hotel, my host texted to see if I needed anything. She was a leader at the high school I was speaking at that week, and a friend. I told her I was fine, just heading back from visiting Columbine. She wrote back with great enthusiasm, with all the emojis, because her husband (also a friend) is one of the leaders of a non-profit ministry for teens that was started because of Columbine. I knew where he worked, but had no idea of its origins!

Greg Stier was a pastor at a church in Arvada, Colorado, living just minutes away from Columbine High School, when the shootings happened. The tragedy was a “pivotal turning point” in his career, and led him to resign in order to pursue teens full-time through the Dare 2 Share (D2S) ministry.

Since then, Greg and the ministry of D2S have impacted the lives of hundreds of thousands of teenagers across the country, motivating and equipping them to relationally reach out to those who don’t know Jesus with the gospel message of hope.

God, turn what was meant for evil, to good.

He did with an empty tomb, and is continuing through Greg and the rest of us…bringing the good out to the world.

PrevPreviousHappy Valentine’s Day To Your Soul
NextSummer Book Recommendations — Everything From Heart to Home!Next

How Columbine Helped Me See My Life – Looking Back 20 Years

You cannot be over the age of 35 and fly to Colorado to speak at a 3-day teen conference without thinking about it. In fact, it was nearly all I could think about as the plane began it’s descent. The thoughts that rolled over in my head were themselves like dusty folders from high school